Colonial Hills Baptist Church of Indianapolis has been dealt with by God. Three dead from bus crash,plus baby in the womb. #MournForYourSins

The Westboro Baptist Church is back on social media spouting its members’ hateful view of the world. This time they have set their sights on the victims of the horrible bus crash in Indianapolis. The crash, which occurred on Saturday, July 27, on Interstate 495 in Indianapolis, involved a busload of teenagers from a Baptist church summer camp. 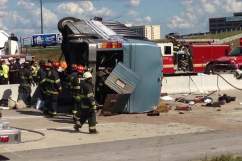 Amongst the dead were a teenager, a husband and wife, as well as the wife’s unborn child. The Westboro Baptist Church has made its name by pontificating Bible scripture in the wake of tragedies, somehow relating the tragedies to the acceptance of homosexuality in society.

Loading more stories
wpDiscuz
0
0
Would love your thoughts, please comment.x
()
x
| Reply
According to the hideous church we should all mourn for our sins.