Warning: Some Viewers May Find the Content of this Video Disturbing

The Guardian has posted a video made by a human rights organisation, produced by award-winning director Asif Kapadia, and staring Yassin Bey (formerly known as actor/rapper Mos Def). The video is a response to the 106-person hunger strike currently gripping the population of 166 Guantanamo Bay detainees and features Bey getting force fed through a tube that is shoved up his nose.

This is not a dramatization, the team that created the short video used the document that leaked in May of this year dictating sets official “protocol and procedures” for dealing with the hunger strike. The documents says:

Place a 10 French or 12 French feeding tube into the patient’s stomach per standard medical practice. Viscous lidocaine should be offered for the nostril and the throat. The tube should be well lubricated prior to insertion.

More than 45 detainees are being force fed and, according to Al Jaezeera, 40 more nurses have recently been sent down to Guantanamo to assist with in the force feeding operation. The procedure usually take about 2 hours to complete. The hunger strike is part of an ongoing protest among detainees in a stand against their mistreatment as well as the fact that many have been detained for years without a formal charge. 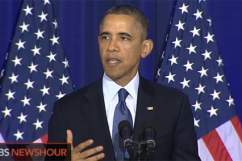 Loading more stories
wpDiscuz
0
0
Would love your thoughts, please comment.x
()
x
| Reply
In light of the massive hunger strike happened in the U.S.-operated prison at Guantanamo Bay, Mos Def is force fed in the same method as the prisoners.