A new in-depth Rolling Stone feature has lifted the lid on Aaron Hernandez’s alleged drug use. The magazine claims in their article The Gangster in the Huddle that the former tight-end for the New England Patriots was hooked on PCP (Angel Dust) around the time of Odin Lloyd’s murder. It was this drug abuse that led Hernandez to be paranoid, to the extent that he was carrying a gun around with him everywhere he went.

Lloyd’s body was found in an industrial park not far from Hernandez’s home on June 18, with the former Pats star being arrested for his murder a few days later. Hernandez has pleaded not guilty to first-degree murder and is being held without bail in a county lockup awaiting trial.

According to Drugfree.org, the effects of PCP include:

At low to moderate doses, PCP can cause distinct changes in body awareness, similar to those associated with alcohol intoxication. Other effects can include shallow breathing, flushing, profuse sweating, generalized numbness of the extremities and poor muscular coordination. Use of PCP among adolescents may interfere with hormones related to normal growth and development as well as with the learning process.

At high doses, PCP can cause hallucinations as well as seizures, coma, and death (though death more often results from accidental injury or suicide during PCP intoxication). Other effects that can occur at high doses are nausea, vomiting, blurred vision, flicking up and down of the eyes, drooling, loss of balance, and dizziness. High doses can also cause effects similar to symptoms of schizophrenia, such as delusions, paranoia, disordered thinking, a sensation of distance from one’s environment, and catatonia. Speech is often sparse and garbled.

It’s also noted that the drug is addictive and that users can experience: “memory loss, difficulties with speech and thinking, depression, and weight loss.”

The piece in the magazine, that was published online on August 28, details Hernandez’s open letter to the 32 teams in the NFL prior to his entering the draft, asking teams to ignore reports about his anti-social behaviors. It read in part:

My coaches have told you that nobody worked harder than me, the only X-factor is concerns about my use of recreational drugs. To address that, I am putting my money where my mouth is.

The magazine notes that Hernandez offered to take eight drug tests per season but that his agents would have told him the NFL Players Association would block any such additional testing. 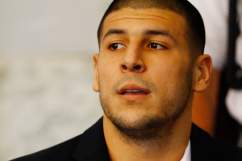