The Cleveland monster, Ariel Castro, will spend the rest of his pitiful life behind bars as Judge Michael Russo sentenced him to life plus 1,000 years for kidnapping, aggravated murder and a raft of other charges. Judge Russo commented that Castro suffered from “extreme narcissism.” Castro will also be forced to pay a fine of $100,000, loses his property and his forbidden to make any profit from his crimes. Further, Castro is not allowed any contact to his victims nor with the daughter he fathered with one of his victims, Amanda Berry.

Castro was accused of kidnapping, torturing and raping his victims, Amanda Berry, Gina DeJesus and Michelle Knight. Whom he abducted from the street and held in his house of horrors for varying lengths of time. He is also stood accused of the aggravated murder of Knight’s unborn child by forcing her to miscarry through vicious beatings. The judge told Castro as he read out his sentencing:

“…you don’t deserve to be out in the community you are still dangerous.” 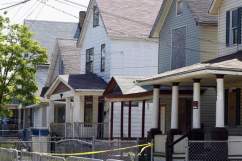 During the sentencing hearing where one of Castro’s victims, Michelle Knight, spoke bravely, telling Castro his “hell had just begun.” The kidnapping monster also read out a rambling statement where he told the court that he is an “addict,” that the sex that occurred in his home was “consensual” and that he is not a “monster.”

Kidnapping victim Michelle Knight just prior to reading out her heroic statement.