Two children have been killed by a python snake as it escaped the reptile pet store (above) in Campelton, New Brunswick, Canada, where it was being held reports CBC.

The two boys who were killed have been named as 4-year-old Noah and 6-year-old Connor Barthe.

Initial reports incorrectly stated that the snake was a boa constrictor.

1. The Snake Was in an Apartment

The snake got into an apartment above the urban zoo, known as Reptile Ocean, and killed the two boys. Police believe the snake escaped its enclosure at night and entered the living room where the boys were sleeping through a ventilation duct. The python punched a hole through the ceiling and fell to the floor. The two children were sleeping on the floor at the time. It’s thought the snake strangled the two boys. The snake has been euthanized.

2. The Kids Were on a Sleepover

The two children were on a sleepover with a friend, their friend’s dad is owner of the pet store. Const. Julie Rogers-Marsh of the Royal Mounted Canadian Police told reporters:

The preliminary investigation has led police to believe that a python snake escaped its enclosure in the store sometime overnight. It’s believed the two boys were strangled by the snake.

The friend’s dad discovered the two bodies, he believed the boys were sleeping until he turned on the lights and saw the horrific scene. 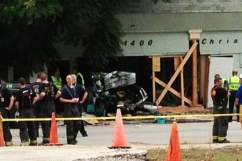 3. The Goverment May Shut Down the Store

Campelton’s Deputy Mayor Ian Comeau has said the whole town is in shock and the store may be closed as a result of the tragedy. The store has been bombarded with abuse on their Facebook page:

The children were attacked by a snake similar to this one shown.

It has only been legal to bring pythons, and other large snakes, into New Brunswick since 2009. In neighboring Nova Scotia, possession of Boa Constrictor snakes is illegal. Biologist Kevin Craig told CBC that he thought pet stores had pushed to the change in law:

They approached the Department of Natural Resources and they said they felt, in looking at their membership and their members’ concerns across Canada and within New Brunswick, that New Brunswick was quite restrictive on the number of animals it allowed in the… commercial and retail pet trade.

The snake, an African rock python, is estimated to have weighed around 100 pounds and is 14 feet long.

5. Python Attacks Are Quite Rare

Known as “ambush feeders,” pythons tend to use constricting to kill their victims. They are venomous but the force of their constricting is so severe they rarely use their bite.

Loading more stories
wpDiscuz
2
0
Would love your thoughts, please comment.x
()
x
| Reply
Two children have been killed by a python snake that escaped its pen in a reptile house in New Brunswick, Canada.