From this day forth, Bradley Manning wants to be referred to as Chelsea. The 25-year-old Army private who was sentenced to 35 years in prison yesterday for leaking confidential information to Wikileaks told the Today show that she wanted to be referred to with a feminine pronoun.

She says that she plans on receiving hormone therapy “as soon as possible.”

Subject: The Next Stage of My Life

I want to thank everybody who has supported me over the last three years. Throughout this long ordeal, your letters of support and encouragement have helped keep me strong. I am forever indebted to those who wrote to me, made a donation to my defense fund, or came to watch a portion of the trial. I would especially like to thank Courage to Resist and the Bradley Manning Support Network for their tireless efforts in raising awareness for my case and providing for my legal representation.

As I transition into this next phase of my life, I want everyone to know the real me. I am Chelsea Manning. I am a female. Given the way that I feel, and have felt since childhood, I want to begin hormone therapy as soon as possible. I hope that you will support me in this transition. I also request that, starting today, you refer to me by my new name and use the feminine pronoun (except in official mail to the confinement facility). I look forward to receiving letters from supporters and having the opportunity to write back.

NBC is reporting that the Army does not provide hormone treatment or sex-reassignment surgery for so-called “gender identity disorder”:

On #BradleyManning, US Army says it does not provide hormone therapy, sex-reassignment surgery for gender identity disorder – @NBCNews

However, the very classification “gender identity disorder” is considered offensive by the LGBT community: 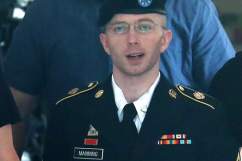 Loading more stories
wpDiscuz
0
0
Would love your thoughts, please comment.x
()
x
| Reply
Bradley Manning told the Today show this morning to refer to her from now on as Chelsea Manning.