Investigators at the scene of a fatal shooting in DeSoto. (NBC 5)

At least four people are dead and four more injured in Texas after a shooting spree in Dallas and DeSoto Wednesday night, reports WFAA 8 News.

Authorities confirm that a man looking for his ex-girlfriend walked into her southwest Dallas home and shot four people. Upon discovering that the woman who he was looking for was not home, he proceeded to a home in DeSoto where he tossed in an explosive. After it detonated, he entered the home and shot four more people, including his ex-girlfriend.

Sources said children were among the victims, but their ages were not released.

Authorities say the suspect, male, was taken into custody and is being held at DeSoto Jail pending charges. 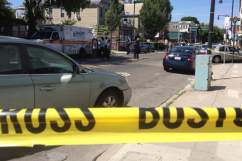 Read More
Breaking News, Crime, Shooting, Texas
Sources said children were among the victims, but their ages were not released.