A 16-year-old, Demetruis Glenn, has been arrested and charged with the first-degree-murder of 88-year-old World War II veteran, Delbert “Shorty” Belton. Belton was attacked while he waited in his car at the Eagles Lodge in Spokane, Washington on August 21. He was beaten by two men, Belton died in hospital, reports The Spokane Review.

According to KREM, police do not normally release the names of minors involved in crimes but did so in this case due the “severity of the crime.”

1. Glenn Was Charged This Afternoon With Murder

He will be charged as an adult for the murder of Delbert “Shorty” Belton. He appeared in court at 1:30 p.m. in Spokane on August 23. Glenn had been apprehended on Friday August 22 for the crime. It was later revealed that Glenn turned himself in.

2. He Has a Criminal History ‘With a Deadly Weapon’

He’s reported to have a long criminal history. Alex Rozier, a reporter with KHQ in Spokane, has been tweeting about Glenn’s history with the law:

3. Glenn is a Fan of Chief Keef

He’s a fan of rapper Chief Keef, similar to the three alleged killers of Australian student Christopher Lane, who often posted Keef’s lyrics on social media. One of Glenn’s favorite YouTube videos is a report on Keef’s possible involvement in the murder of another rapper, Lil JoJo (video above). 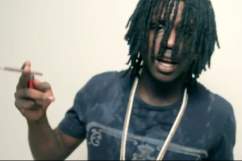 4. His Other Interests Include Sports and The Kardashians

He’s a fan of Keeping Up With the Kardashians.

5. The Second Suspect Has Been Named as Kenan Adams Kenard

Adams Kinard was identified in court documents and is the man police are looking for. Still no word if he is in custody. @KHQLocalNews

The second suspect is said to still be at large. Police believe he was driving in a stolen vehicle last night. He has been named as Kenan Adams Kenard.