This morning around 9 a.m. an explosion and fire rocked the Naval Weapons Station Earle close to Middletown, New Jersey. The situation has been stabilized, but reports of injuries are still trickling in and the cause of the explosion is still unknown. Damage was done in a boathouse and a section of the roof appears to be damaged.

1. The Navy Has Confirmed an Explosion

On their Twitter account this morning, the United States Navy confirmed that an explosion did occur at the Naval Weapons Station Earle at around 9 a.m.

According to NBC Philadelphia, nine are hurt, including one firefighter, and one seriously injured, presumably the one airlifted.

The base employs around 1,500 contractors.

UPDATE: 1 serious injury after explosion at Naval Weapons Station Earle in NJ, the Navy says. Cause is under investigation.

3. The Facility Sprawls Across 10,000 Acres in Many Towns

The base is over 10,000 acres and parts of it are in Colts Neck Township, Howell Township, Wall Township, Tinton Falls, Sandy Hook Bay, and Middletown.

4. It ‘Handles Stores and Transports’ Ammunition

According to Globalsecurity.org, Earle Naval Weapons Station loads and unloads weapons systems and ammunition on and off of the navy’s war ships.

It is unclear if ammunition or weapons were the cause of the explosion.

5. The Explosion Could be a Welding Accident

The Navy made an official statement saying that the explosion occurred during routine maintenance on a utility boat.

Local ABC affiliate is currently reporting that the small explosion is, “either some kind of welding accident..or a propane tank exploded.” 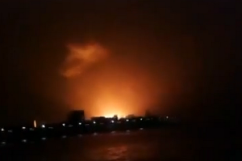