A huge explosion partially sank an Indian naval submarine docked in Mumbai early Wednesday with 18 crewmen still feared trapped, reports The New York Times. Authorities are still unsure if there are any fatalities.

“There are some people who are trapped on board, we are in the process of trying to rescue them, we suspect it to be in the range of 18,” Navy spokesman PVS Satish said. “We will not give up until we get to them.”

Many sailors jumped to safety.

The blast occurred shortly after midnight and left the ship badly damaged and on fire. It took firefighters several hours to douse the blaze, however, the ship remains partly submerged.

Divers were sent into the waters after the fire was put out to search for the men on board that may still be trapped.

The cause of the blast is unknown at this time, but officials said they suspect it to be the result of an on-board error and not an act involving any outside agency.

The navy has not yet issued an official statement.

The Russian vessel, the INS Sindhurakshak, returned from Russia last year after undergoing an upgrade. It is said to be one of the 10 Kilo-class submarines bought from Russia between 1986 and 2000. 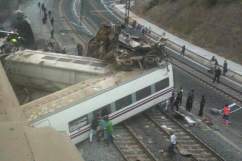 Read More
Breaking News, Explosion, India, Navy
Authorities are still unsure if there are any fatalities.