Gerald M. Bailey, the Florida law enforcement commissioner, has rejected a request for an independent investigation into the death of Ibragim Todashev, friend of Boston Marathon Bomber Tamerlan Tsarnaev.

Todashev died in FBI custody inside the state on May 22.

In a letter to the American Civil Liberties Union (ACLU), Bailey said that the FBI and the Justice Department are handling the investigation, reports the Boston Globe.

“This is an active federal investigation,” read the letter. “It would be inappropriate for FDLE to intervene.”

Others are arguing that this is not good enough. Orlando police officers were at the scene of the interrogation. The ACLU has called the FBI’s refusal to investigate the death of Todashev “disappointing.”

“Secrecy fosters suspicion and the people of Florida deserve better than to be left without an explanation from their government about what led to a person being shot to death,” said Howard Simon, director of the Florida ACLU in a news release.

What we know, according to reports, is that Todashev was allegedly about to sign a confession that implicated himself and Tamerlan Tsarnaev in a 2011 triple murder in Waltham, Massachusetts. That’s when things get cloudy.

There have been mixed reports out of the federal agency as to the cause of Todashev’s death. Conflicting stories have emerged, claiming he had a knife, a table leg, broom stick, or a metal pole. Others claim he was unarmed.

Here is a statement the FBI released in May.

Mr. Todashev, according to the FBI, confessed to his involvement in [a 2011 triple homicide] and implicated [Tamerlan] Tsarnaev. He then started to write a statement admitting his involvement while sitting at a table across from the agent and one of the detectives when the agent briefly looked away, the official said. At that moment, Mr. Todashev picked up the table and threw it at the agent, knocking him to the ground.

While trying to stand up, the agent, who suffered a wound to his face from the table that required stitches, drew his gun and saw Mr. Todashev running at him with a metal pole, according to the official, adding that it might have been a broomstick.

Additionally, the FBI has barred Florida from releasing Todashev’s autopsy results. So to this point, the public is not able to even find out his cause of death.

You can see graphic photos of his body here. 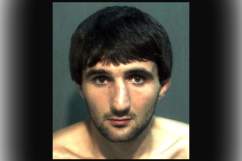