Jailene Diaz-Ramos is the next in a long list of names that have been associated with former New England Patriot Aaron Hernandez. Authorities have found a gun that was involved in a 2012 Boston murder in Diaz-Ramos’ car, according to CBS Springfield. The murder may be linked to Hernandez, who is already jailed on charges of killing Odin Lloyd this summer.

Here’s what you should know about Diaz-Ramos and her alleged involvement.

1. The Gun Was Found In Diaz-Ramos’ Car By A Football Player Nicknamed ‘Chicago’

A gun connected to a murder in which Aaron Hernandez is linked was found in Jailene Diaz-Ramos’ car. Police found the gun after Diaz-Ramos was an a car accident on June 21 on Interstate 91 in Springfield, CT. Police discovered in a black briefcase in the trunk that contained a .38 caliber Smith and Wesson revolver while conducting an inventory of the vehicle, according to CBS.

Diaz-Ramos told police that the gun belonged to her friend, who she referred to as “Chicago.” She also said that she once drove Chicago and his friend to work. They left the briefcase in the trunk so they wouldn’t have to bring it into work with them.

After being sent for ballistic testing, authorities have confirmed the weapon was used in the killing of two men outside of a Boston bar in 2012. Police have been investigating former New England Patriot Aaron Hernandez in connection with the murder.

Jailene appears to have her car back, according to her Facebook profile. In the post, she thanks friends for dropping “big ass buds” in her car enough for her to make a blunt out of. 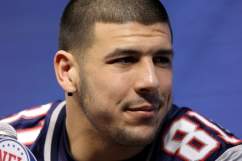 2. Diaz-Ramos Lives In Either New Britain Or Bristol Connecticut

On Facebook, Diaz-Ramos lists her current city as New Britain, Connecticut. A report from 2012 regarding an arrest claims that she lives in Bristol.

Diaz-Ramos is Facebook friends with DJ Hernandez, the older brother of accused murderer Aaron Hernandez. 27-year-old is a football coach at the University of Iowa and has both a Bachelors of Science and Masters Degree in Educational Psychology, and then returned to UConn to get a second Masters degree from the Neag School of Education in school counseling. Additionally, DJ Hernandez was recognized as Scholar Athlete in 2008 by UConn and had a high enough GPA to make the Dean’s List in both 2007 and 2008. All this while playing and then coaching football.

4. Diaz-Ramos Has A Criminal Record

Arrested in Bristol last November and charged with first degree forgery, criminal impersonation and sixth degree larceny, according to the Plainville Observer. She was also arrested last February for a failure to appear in court.

Another arrest occurred in April after she was found driving with an expired license.

5. She Was Recently Scorned By A Lover

It looks like Diaz-Ramos has recently had her heart broken, likely caused by a bout of infidelity. 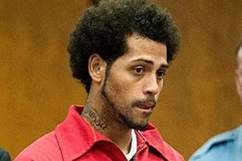 Read More
Aaron Hernandez, Breaking News, Murder
Follow Heavy ↓
Authorities have found a gun that was involved in a 2012 Boston murder in the car Jaliene Diaz-Ramos. Aaron Hernandez, former Patriot is linked to the murder.