German tourist, Jana Lutteropp, died in the hospital a week after losing her right arm in a horrific shark attack while swimming in the waters of Maui, Hawaii, reports the Daily Mail.

The 20-year-old girl was snorkeling at Palauea Beach in Makena on August 14 when the shark bit off her arm. She was rushed to Maui Memorial Medical Center where she had been on life support in critical condition. On Wednesday, Lutteropp lost the battle to stay alive.

“Jana fought hard to stay alive,” said a statement from her mother and sister, which was released by hospital spokeswoman Carol Clark. “However, we are sad to say that she lost her fight today. Jana was a very beautiful, strong, young woman who was always laughing, and we will forever remember her that way. We appreciate all the support from the Maui community, as well as the prayers and thoughts from around the world and in Germany. We especially want to thank the wonderful caregivers and everyone at Maui Memorial Medical Center.”

California high school teacher Rick Moore jumped into the water to rescue the young girl when he heard her screaming and surrounded in blood.

“About 10 feet from her, I saw her floating on her back, with no arm,” Moore said. “It was completely severed from her body.”

He said Lutteropp kept repeating that she was going to die.

“I was really hoping it would be a miracle and she would pull through,” Moore said soon after hearing of the her death.

Lutteropp is originally from Zierenberg in western Germany. She left the country last summer to work as an au pair in Seattle, Washington. She was in Hawaii for a three week vacation and planned to return home on September 11.

Hawaii officials announced Tuesday that they plan on studying Tiger shark movements in Maui after an unusual spike in shark attacks since 2012. There have been eight attacks in Hawaii this year and there were 10 last years. Hawaii usually averages three to four a year. The last time someone died from a shark attack in the state was in 2004. 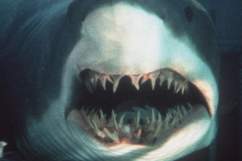 Loading more stories
wpDiscuz
0
0
Would love your thoughts, please comment.x
()
x
| Reply
The 20-year-old girl was snorkeling at Palauea Beach in Makena on August 14 when the shark bit off her arm.