TNA pro wrestler and Olympic gold medalist Kurt Angle just got in trouble with the law…again.

After he finished a set of live tapings for TNA’s Impact show on Spike TV, law enforcement agents arrested Angle on Thursday night. The charge? A DWI, which now stands as the pro wrestler’s fourth alcohol-related charge in the last six years.

I am blessed to have the support of my family, my friends and my company. In light of recent events I will immediately be entering a

rehabilitation center. I realize that this is a pivotal time in my life and I ask for your understanding as well as your prayers and

continued support. I am confident that in taking these steps I can begin to address necessary changes in my life.

Your wrestling friends would be so into this, share it!

Back in 2011, Angle spoke about his DWI charges at the time on camera. He almost broke down in tears:

Kurt Angle Crying About DUI ChargesKurt Angle was found not guilty of driving under the influence, but feels as though his reputation has been besmirched. I have met Kurt and he is a very nice guy.2008-09-11T02:53:01.000Z

Kurt Angle may have had some unfortunate run-ins with the law, but his legendary status in the ring is still intact. Check out some of Angle’s career highlights below: 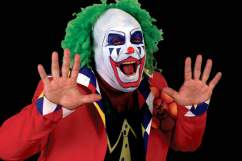