Using stem cells from cows, scientists from the Netherlands were able to create the first laboratory-made hamburger.

The world-changing burger was then cooked by chef Richard McGowan and served on the BBC this morning. You can watch a video of that tasting above.

Hanni Ruetzler, an Austrian food researcher, said that she was “expecting the texture to be more soft—there is quite some intense taste, it’s close to meat, but its not that juicy.”

Likewise, food writer Josh Schonwald said, “The mouthfeel is like meat. I miss the fat, there’s a leanness to it, but the general bite feels like hamburger.

Professor Mark Post from Maastricht University said that the first iteration of the burger was a good start. Above, you can watch Post explain the process by which he turned thousands upon thousands of stem cells into a hamburger.

According to AP, the whole project cost around $332,200 and was focused on finding a meat alternative as starvation in developing nations continue and world meat consumption rises.

In case you were wondering, PETA’s president Ingrid Newkirk gave her full support to the project. 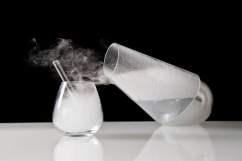 Food of the Future: Inhale Your Favorite Meals with ‘Le Whaf’

Loading more stories
wpDiscuz
0
0
Would love your thoughts, please comment.x
()
x
| Reply
Today researchers in Holland have eaten the first burger produced in a laboratory. The meat is made of cow cells turned into artificial muscle.