An Alabama man died after being found guilty of sexual abuse of a child on Monday, reports WBRC.

William Thomas Moore, 42, was seen placing an unknown substance in his mouth following the announcement of his verdict at Tuscaloosa County Circuit Court. When asked what the substance was, Moore reportedly said it was his daily medication and he was then transported to the Tuscaloosa County Jail.

“He went into medical distress when he was taken to the jail,” Sgt. Dale Phillips said.

Authorities are still unsure about what the substance Moore the man took was, but said that an autopsy on Tuesday would shed light on the situation.

A jury found Moore guilty of sexual abuse of a child younger than 12, but not guilty of first-degree sodomy. He had not been sentenced yet, but faced 20 years in prison. He was indicted on the charges in 2011.

This isn’t the first case of its kind. Earlier this year, a Missouri man committed suicide by taking a cyanide pill after he was convicted of sodomizing a 14-year-old girl. In 2012, a man collapsed in court after being convicted of arson. An autopsy report declared cyanide poisoning as his cause of death. 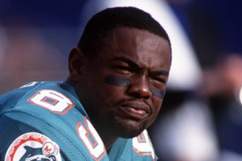