A marriage proposal in the middle of a crowded shopping mall in Dubai has gone viral after going horribly wrong by ending up with the would-be bride hitting a hopeless romantic over the head with a ukelele.

The couple walk up to a group of musicians where the man grabs a microphone and asks for attention. As a crowd begins to form, he launches a sappy speech to his embarrassed girlfriend.

“I have a very special message for a very special girl,” the man says. “This is where we met three months ago. You are my charm, you are my sweety pie, you are my cutie pie, my absolute everything, and I know you find this cheesy but I want everyone to know, you make me really happy. When you smile, the whole world stops and stares for a while. And my heart ceases to beat and there is nothing else I seek except you. And I Just have one question for you. You truly make me that happiest person on earth.”

Before he can finish, the would-be bride begs him to stop and ultimately grabs a ukelele from one of the musician’s hands and whacks it against the man’s, sending him to the floor.

The painfully embarrassing video went viral, but there is speculation that the whole thing is a publicity stunt because about halfway through a mall train passes the couple bearing the message “not so sweet.” Either way, the video is hilarious. Check it out! 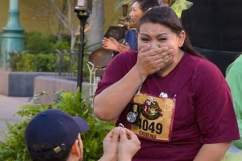 Loading more stories
wpDiscuz
0
0
Would love your thoughts, please comment.x
()
x
| Reply
A marriage proposal has gone viral after going horribly wrong by ending up with the would-be bride hitting a hopeless romantic over the head with a ukelele.