Rafael Caro Quintero, a Mexican drug kingpin that helped establish one of the country’s biggest drug cartels, was freed from prison on Friday after the court ruled that he has been improperly tried. Here’s what you need to now.

1. Rafael Caro Quintero Was Freed After 28 Years in Prison

The court ruled on Wednesday that he had been improperly tried in a federal court for a crime that should have been treated as a state offense. Prison officials were notified of the recent ruling on Thursday and the drug kingpin walked away on Friday. He was originally sentenced to 40 years in prison.

2. He Kidnapped and Killed a U.S. Drug Enforcement Administration Agent in 1985

In 1985, the drug lord kidnapped and killed a U.S. Drug Enforcement Administration agent, Enrique Camarena. Quintero ordered Camarena kidnapped, tortured and killed, allegedly because he was angry about a raid on a 220-acre marijuana plantation in central Mexico that was seized by Mexican authorities on Camarena’s orders. His body was found in a shallow grave a month later and showed signs of torture.

3. The U.S. Department of Justice is ‘Extremely Disappointed’

The U.S. Department of Justice announced that it was “extremely disappointed” by the release of Quintero, calling it “deeply troubling.”

Mexico’s Attorney General Jesus Murillo Karam said that he was “worried” about the court’s decision.

4. He Still Faces Charges in the U.S.

Quintero still faces charges in the U.S., but Mexico’s Attorney General’s Office said it was unclear whether there was a current extradition request.The U.S. requested his extradition for the Camarena killing, something the kingpin can’t be tried twice for, but may not have filed extradition requests for pending U.S. drug charges.

The DEA said it “will vigorously continue its efforts to ensure Caro-Quintero faces charges in the United States for the crimes he committed.”

5. He Was a Founding Member of One of Mexico’s Earliest and Biggest Drug Cartels

Quintero helped establish a powerful cartel based in the northwestern Mexican state of Sinaloa that later split into some of Mexico’s largest cartels. 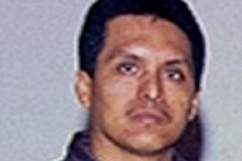 Loading more stories
wpDiscuz
0
0
Would love your thoughts, please comment.x
()
x
| Reply
Rafael Caro Quintero, a Mexican drug kingpin that helped establish one of the country's biggest drug cartels, was freed from prison on Friday after the court ruled that he has been improperly tried.