A rodeo clown at the Missouri State Fair on Saturday put on an Obama mask and asked the crowd if they would like to see “Obama run down by a bull,” according to the Washington Post.

Many people in the audience responded in cheers.

The rodeo announcer did not know the clown, who was wearing a microphone, was going to pull the stunt.

The fair has been criticized for the tasteless joke.

State Fair Officials have called the act “inappropriate” and said it “does not reflect the opinions or standards” of the fair.

“We strive to be a family friendly event and regret that Saturday’s rodeo badly missed that mark,” said fair officials.

Missouri Lieutenant Governor Peter Kinder denounced the act, calling it “disrespectful” to the president, according to USA Today.

Perry Beam was in the crowd when it happened Saturday:

It was the usual until the very end at bull riding. As they were bringing the bulls into the chute and prepping them … they bring out what looks like a dummy. The announcer says ‘Here’s our Obama dummy, or our dummy of Obama. They mentioned the president’s name, I don’t know, 100 times. It was sickening. It was feeling like some kind of Klan rally you’d see on TV. I’ve never seen anything so blatantly racist in my life.

The Missouri State Fair commission has since been permanently banned the rodeo clown who wore the mask, according to KSDK.com. 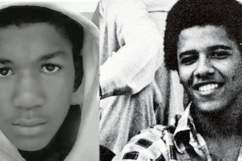 WATCH: Obama Says ‘Trayvon Martin Could Have Been Me’ 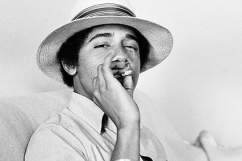 Read More
Barack Obama, Politics, Racism
A rodeo clown at the Missouri State Fair on Saturday put on a mask of President Obama and asked the crowd if they would like to see “Obama run down by a bull.”