Tensions in the Middle East continue to rise as both allied and opposition forces position themselves in the region surrounding Syria.

Today Russia diverted two Navy ships to the Mediterranean. President Vladimir Putin has ordered one missile cruiser and one anti-submarine ship to the region. They will reportedly arrive “over the next few days.”

It is unclear whether this move was due to a regular rotation or in response to the current situation in the region.

But “the well-known situation shaping up in the eastern Mediterranean called for certain corrections to the make-up of the naval forces,” said a source in the Russian General Staff.

On the other axis, following yesterday’s seven-vessel increase in the region, the British RAF continues deploying aircraft to their military base on the island state of Cyprus. Britain’s Ministry of Defence has announced it sent six RAF Typhoon jets the Akrotiri air base to protect British interests in the region in the event of a military engagement. 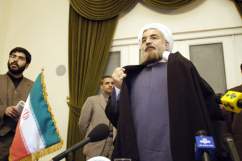 Iran Threatens to ‘Burn Down Israel’ When U.S. Attacks Syria