Sarah Thomas is the former college basketball player that may soon make NFL history. As soon as 2014, she could be the first female referee for the organization. 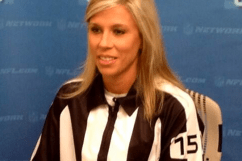 1. Sarah Thomas is a Participant of the NFL Officiating Development Program

Sarah Thomas has been a part of the NFL Officiating Development Program since 2006. The program identifies top-level officials with NFL potential and seeks to perfect their abilities through a series of on and off-the-field training programs. The most advanced officials in the program are considered finalists for NFL openings when they arise. Thomas is among the advanced.

“I didn’t set out to break a glass ceiling or a gender barrier,” Thomas told Bloomberg in early July. “If you’re doing things because you love them, then things have a tendency to just kind of fall into place.”

3. She Was Introduced to Officiating by Her Brother

Thomas began officiating in 1996 after accompanying her brother to a meeting of the Gulf Coast Football Officials Association. She was immediately intrigued by the team aspect of an officiating crew and by how little she knew about the rules of football. She began officiating for youth leagues at the age of 23 and eventually made her way up to the college level.

After ten years and three children, Thomas decided to hang up the towel on football, but before she could do so, she caught the attention of Gerald Austin, an NFL official for more than 25 years who is now the coordinator of football officials for Conference USA.

“She made one tough call after another and nailed every one of them,” Austin said. “There was no reason not to hire her.”

Thomas’ first passions were softball and basketball. She was the first athlete at her high school to letter five times in a sport (softball) and went on to attend the University of Mobile on a basketball scholarship.

The NFL could have its first full-time female official by 2014: http://t.co/ab8YLAd2LI

If Thomas gets selected for a full-time position officiating with the NFL, she could start as early as the 2014 season.

Thomas is now one of 21 officials who are in the running to become an official for NFL when a position becomes available and many are hoping that Thomas will be that one.

Thomas was born in Mississippi in 1973 and went to Pascagoula High School before attending the University of Mobile. She currently resides in Brandon, Mississippi.

9. She Works as a Pharmaceutical Representative Off the Field

When Thomas isn’t making calls on the field, she works full-time in pharmaceutical sales for Novo Nordisk.

10. She Has Three Children

Thomas and her husband Brian have two boys, ages 12 and 9, as well as a 7-month-old baby girl.

Read More
Breaking News, Football, NFL, Referee
As soon as 2014, Sarah Thomas could be on the field as the first woman referee for the National Football League.