In a possible precursor to military action, Secretary of State John Kerry held a brief press conference confirming the alleged chemical weapons attack in Syria. Referring to the attack as “undeniable,” Kerry also said that the Syrian regime attempted to destroy evidence of the chemical shelling.

“While investigators are gathering additional information on the ground, our understanding of what has already happened in Syria is grounded in facts, informed by conscious and guided by common sense. The reported number of victims, the reported symptoms of those who were killed or injured, the first hand accounts from the humanitarian organizations on the ground […] these all strongly indicate that everything these images are already screaming at us are real: that chemical weapons were used in Syria. We know that the Syrian regime maintains custody of these chemical weapons,” said Kerry.

You can read Kerry’s statement in its entirety by clicking here. 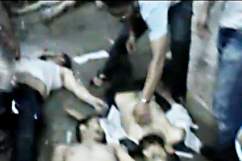 Earlier today, U.N. investigators survived a sniper attack on the way to the scene of the chemical attack. After making it through the ambush, the chemical weapons experts took blood samples from victims of the August 26 shelling that killed between 500 and 1300 civilians. Reuters calls the attack “the world’s most lethal chemical weapons attack since the 1980s.”

The Secretary of State explained to the world how he went back and watch the videos that have been circulating social media online and expressed his disgust and anguish at the thought of a chemical weapons attack.

John Kerry: "I went back and I watched the videos…it is hard to express the words the human suffering that they lay out before us."

John Kerry: "Our sense of basic humanity is offended. Not only by this cowardly crime, but by the cynical attempt to cover it up." #Syria 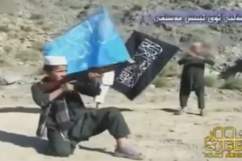 Kerry also told the media that the government does have additional information that will be revealed in the following days. President Obama is currently reviewing the information and considering a use of military force. Recent polls published by the Washington Post reveal that intervention in Syria actually has a lower approval rating than the U.S. congress, which is currently at an all-time low. According to the poll, which was conducted by Reuters, only nine percent of respondents said that the United States should intervene militarily in Syria.

“Make no mistake, President Obama believes there must be accountability for those who would use the world’s heinous weapons against the world’s most vulnerable people,” said Kerry.

White House Press Secretary Jay Carney confirmed to the media this afternoon that congress is being contacted and briefed on the situation, supposedly for a possible future vote on military intervention.

U.S. military options have been discussed in the media for weeks regarding intervention in Syria. According to NBC News, the United States currently has four destroyers near Syria in the eastern Mediterranean. A Fox News broadcast reported that no U.S. aircraft carriers have been mobilized to the region. What complicates the situation is that Syria has strong air defenses, which would complicate an aerial attack. Because of this, an American strike against Syria would most likely utilize cruise missiles (or TLAMs, Tomahawk land attack missles) launched from destroyers or submarines positioned in the Mediterranean. The Guardian has also reported an increase in British forces in the region over the last 48 hours.

This afternoon’s press conference is believed by many to change the question on whether the U.S. will militarily intervene in Syria from an “if” to a “when.” The Washington Post has called Kerry’s statement a “war speech.” 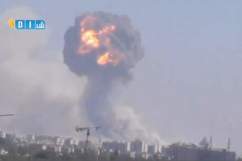 If you’re interested in seeing where the world’s leaders stand on taking military action in Syria, you can check out the Daily Mail’s handy sidebar here.

After this speech from Kerry, I found it hard to believe the U.S. will not act militarily.

But as Obama Administration Press Secretary spoke with the media, he stressed that this situation cannot be remedied by military action, but by political solutions.

Carney on Syria: "There is not a military solution to that conflict; there has to be a political solution."

Russia and Iran have also confirmed the use of chemical weapons in Syria.

Today’s strong statements from Kerry highlight the U.S.’s former relationship with the head of state. Andrew Kacynski of Buzzfeed posted this:

When Kerry had dinner with Assad a few years ago. http://t.co/TfCBFW5wNw pic.twitter.com/LMAeFPrbDE