“Detectives met with Shelly Miscavige in person,” an LAPD source said. “The investigation is completed and classified as unfounded.”

Shelly has reportedly not been seen in public for six years. According to The Underground Bunker, a website that focuses on the inner workings of the secretive organization, Miscavige was allegedly transferred from Scientology’s headquarters to a secret compound near Lake Arrowhead in late 2005 or early 2006, which reportedly houses about a dozen Scientologists who are said to be completely cut off from the outside world. Miscavige’s whereabouts have since not been confirmed and it’s questioned whether she has the freedom to leave or is being “punished for her own shortcomings.”

Remini filed the missing persons report for Miscavige on Wednesday after leaving the church over concerns about the treatment of members and the alleged backlash she received when she asked why Miscavige wasn’t in attendance at the 2006 wedding of Tom Cruise and Katie Holmes. The then-church spokesman, Tommy Davis, reportedly told Remini, “You don’t f—ing rank to ask about Shelly.”

The LAPD may have closed the missing persons case, the question of where Shelley Miscavige is exactly remains to be unanswered. Draw your own conclusions… 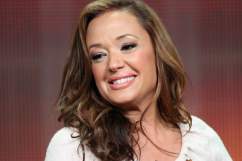