Vacationers were abruptly awakened late Sunday night when a 60-foot-wide sinkhole began to swallow up parts of a resort near Disney World in Clermont, Florida, reports ABC News.

About 30 percent of the three-story Summer Bay Resort collapsed around 3 a.m Monday morning. All 105 guests staying at the resort, as well as those in the neighboring buildings, were evacuated and there were no reported injuries. The building was reported as a total loss.

The first sign of the sinkhole was spotted by a security guard, Richard Shanley, who was flagged down by a guest to report a blown out window Sunday night around 10:30 p.m. Shanley reported it to management and then another window blew. That’s when staff made the decision to evacuate the building. Staff ran up and down the hallways evacuating guests from their rooms. A couple with a baby could not open their door and had to break their window to get out.

Darren Gade and his fiance witnessed the event.

The building continued to sink into the ground over the next five hours. Some guests were evacuated so abruptly that they had to leave behind their wallets and purses. Paul Caldwell, the development’s president, said the resort gave all affected guests other rooms and cash advances.

Caldwell is waiting on further inspections to determine the damage to the surrounding buildings. 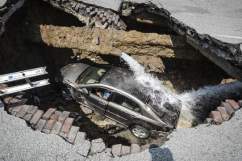