Perfectly timed with Miley Cyrus‘ antics at the VMAs, Oxford English Dictionary now officially recognizes “twerking” as a legitimate term. It was announced today that the OED has incorporated a series of brand-new words into its compendium. Check out some of the most popular words below.

Phablet: (noun) a smartphone having a screen which is intermediate in size between that of a typical smartphone and tablet computer.

Selfie: (noun) a photograph that one has taken of oneself, typically one taken with a smartphone or webcam and uploaded to a social media website.

Emoji: (noun) a small digital image or icon used to express an idea or emotion in electronic communication.

Derp: (exclamation) used as a substitute for speech regarded as meaningless or stupid, or to comment on a foolish or stupid action.

FOMO: (noun) anxiety that an exciting or interesting event may currently be happening elsewhere, often aroused by posts seen on a social media website. 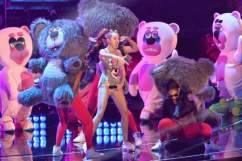