On Monday August 25, U.S. Army Staff Sergeant Ty Carter, 33, will be awarded the Medal of Honor, the highest military honor the United States can give. The award is given to those who, “distinguished himself conspicuously by gallantry and intrepidity at the risk of his life above and beyond the call of duty.”

Here is what you need to know about the most recent recipient of this award:

1. His Award is for Valor at the Battle of Kamdesh

Caster was stationed at Combat Outpost Keating in the Kamdesh District of Afghanistan. On October 3, 2009, the outpost, which was situated in a valley surrounded by mountains, came under heavy fire from Taliban insurgents.

According to the U.S. Army’s official narrative of Carter’s experiences, he ran multiple times from his fellow soldiers back to the Ammunition Supply Point to keep his comrades supplied:

With complete dedication to the task, and at great risk to his life, Carter ran the gauntlet a second time as enemy fire blossomed around him. Carter received two cans of lubricant from his platoon sergeant, Sgt. 1st Class Jonathan G. Hill, and then ran to the Ammunition Supply Point, or ASP, to collect ammunition. The doors were locked. Without hesitation, Carter shot off the hasps, secured additional M240 belts, and weaved his way back to the Humvee Battle Position.

Later Carter put himself in danger by providing covering fire for wounded soldiers. After a 12 hours battle, the assault had been held back, but 8 U.S. soldiers had been killed. 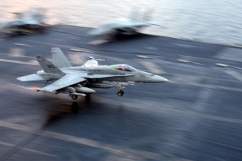 2. He Used to Be in the Marines

Carter enlisted in the Marines in 1998 and served until he received an honorable discharge in 2003. Once he returned to being a civilian he, “bounced from job to job.” Carter told Yahoo that he, “sucked at being a civilian, I had a job where I had no real purpose. I was just showing up doing the same thing over and over again.” You can watch an interview with Carter above.

3. He is the Second Recipient From the Battle of Kamdesh

Staff Sergeant Clinton Romesha was given the Medal of Honor by President Barack Obama in a ceremony on February 11, 2013. He was also given the award for courage during the battle at Combat Outpost Keating on October 3, 2009.

After being in the neck by shrapnel from a rocket propelled grenade, Romesha guided air support that helped neutralize the Taliban forces and end the battle.

4. Carter is the Fifth Living Recipient from Iraq Afghanistan

Carter will become the fifth living soldier to be awarded the Medal of Honor for service rendered in the wars in Iraq and Afghanistan. He joins Staff Sergeant Salvatore Giunta, Sergeant Dakota Meyer, Sergeant First Class Leroy Petry, and Staff Sergeant Clinton Romesha who all won the medal for their service in Afghanistan.

5. Receiving the Honor Comes with Privileges

The award comes rewards recipients for their service with certain privileges. Recipients receive an augmented pension which paid $1,237-a-month as of 2011.

The recipient also receives free domestic or international airfare courtesy of the Department of Defense, burial rights at Arlington National Cemetery, a special identification card, and an invitation to all future presidential inaugurations and inaugural balls.

Loading more stories
wpDiscuz
0
0
Would love your thoughts, please comment.x
()
x
| Reply
On Monday, President Obama will present a Medal of Honor to Staff Sergeant Ty Carter for his bravery at the Battle of Kamdesh at Combat Outpost Keating in Afghanistan.