The Westboro Baptist Church is back at it, but this time the mouthing off comes from “church” matriarch Shirley Phelps-Roper, daughter of church founder Fred Phelps Sr. On the 50th anniversary of Martin Luther King’s “I Have a Dream” speech, she’s taken to Twitter to voice some typical WBC hateful nonsense about the civil rights icon, his supporters and alleged quotes from his daughter.

When filthy rebels against God #MarchOnWashington Westboro Baptist Church is there, johnny on the spot to warn you! #GodH8sFags #SSMDoomsUSA

EXACTLY!! Put that another way: pic.twitter.com/d0o7buZoWm #NoFagsInKingsDream I have a dream!

Then Shirley turned her attention to Martin Luther King’s daughter who said in the past:

Did you ever know about this: “[My father] did not take a bullet for same-sex marriage.” — Bernice King, daughter of Martin Luther King, Jr

While it is true that Bernice King does have unfortunate opinions on homosexuality, she does not take the offensive, downright evil approach to preaching her beliefs that Westboro does. King does not exclude LGBT people from joining in commemoration celebrations of her father. 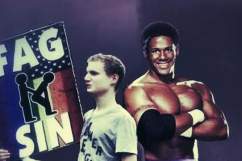 Martin Luther King’s wife, Coretta Scott King, who passed away in 2006, came out in favor of gay marriage in 2004. King’s daughter, Yolanda King, who died in 2007, was described as a “champion of lesbian and gay rights.”