William Camuti, 69, of Sudbury faces attempted murder and other charges in Rakes death.

William Camuti, 69, of Sudbury, Massachusetts, has been named by the local district attorney as the main suspect in the murder of Stephen “Stippo” Rakes. Rakes was found dead in Lincoln, Massachusetts (below), on July 18. He had been wanting to testify in the trial of reputed Boston mobster James “Whitey” Bulger. Stippo had been alleging that Bulger extorted him out of his liquor store in South Boston in 1984.

1. Camuti is Alleged to Have Poisoned Rakes’ Iced Coffee

According to the DA, Camuti lured Rakes to a McDonald’s in Waltham, Massachusetts where he laced his iced-coffee with two teaspoons of potassium cyanide. He then drove around with Rakes waiting for “Stippo” to die. According to DA Ryan, Camuti arranged to have Rakes meet him at the Waltham McDonald’s under the pretext of a real estate project Camuti was planning, that never really existed. 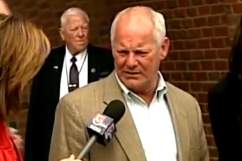 2. He Hasn’t Been Charged With Murder, Yet

He has been charged with with attempted murder, misleading police and unlawful disposal of a body. Police are waiting to get results from a toxicology report on Rakes’ body before charging Camuti with murder.

Appearing in court today, Camuti pleaded not guilty to his charges.

3. There is no Connection to Whitey Bulger’s Trial

It’s not believed that this murder has any connection to Whitey Bulger. Camuti and Rakes are understood to have other money issues. The Boston Globe reports that Rakes was “heavily” in debt to Camuti. Authorities were keen to stress that they believe Camuti acted alone.

Rakes’ family had been suspicious about his death after his body was found without a wallet. ABC is reporting, that someone close to the Rakes family said that Stephen Rakes was found with no phone, wallet, and no nearby car. A friend of Rakes, Steve Davis, told ABC:

Rakes had been struck off from the prosecutions witness list for an undisclosed reason. He had learned of his omission from the trial, the day before his body was found. Reports had stated that Rakes had been looking to gain revenge upon Bulger who took his liquor store to use as a front for his mob operations. Rakes alleges that Bulger threatened his daughter by holding a gun to her head.

5. Camuti May Have Had Legale Trouble in the Past

In 1994 a man named William Camuti was sentenced to nine years in prison found guilty of conducting a large scale mail fraud operation out of Waltham, Massachusetts.