Video and unconfirmed reports are coming in of an alleged gas attack in the Qaboun neighborhood of Damascus, Syria. The claims originated from unnamed rebel sources.

This story is currently developing. Please stay tuned for more…

BREAKING: Many casualties now in Qaboun area in Damascus, alot of indication that some sort of poison or chemical has been used again #Syria

Initial reports claims multiple casualties, currently at sitting at under ten. The video available for viewing above allegedly shows a victim of the gas attack experiencing effects similar to those that have been reported.

Some have suggested that chlorine gas was used in the attack. At this time, it is currently unknown whether this can be considered a chemical weapon attack, although chlorine is technically a chemical.

Chlorine gas is well-known as the first chemical weapon used by the German army in World War I. According to the Hague Conference in 1928, which banned the “use of projectiles the object of which is the diffusion of asphyxiating or deleterious gases,” which chlorine gas falls into. The CDC described chlorine as a “lung damaging agent.” Additioanlly, a damaging acid is produced when chlorine gas comes in contact with moist tissues, like eyes, throat and lungs.

UPDATE: Qaboun already confirmed not a chemical attack but some kind of poisonous gas the confirmed casualties are less than 10 #Syria

A senior NPR strategist has suggested that the claims may be false.

Initial reports of some type of chem attack in Qaboun appear to be a false alarm. Consider this NOT CONFIRMED until more is known. #syria 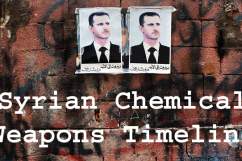 Chemical Weapons In Syria: A Timeline of Media Reporting

Loading more stories
wpDiscuz
0
0
Would love your thoughts, please comment.x
()
x
| Reply
Video and unconfirmed reports are coming in of an alleged gas attack in the Qaboun neighborhood of Damascus, Syria. Multiple casualties have been reported.