Da Real Lambo, 31, is the Miami-based rapper who is dating Gloria James, 44, mother to King James, or Lebron James to you and me, reports Black Sports Online.

The rapper is particularly active on Instagram. From the reading of his online profiles it would seem that in addition to being the new squeeze of Gloria James, he’s also a friend of Lebron’s and he wants the whole world to know it.

Lambo uses his Instagram account to remind you that his life is awesome and yours isn’t. His most recent activity, which led to the revelation that he’s in fact dating Gloria James, was his vacation to the south of France with the James Family. Photos on his account include him chilling on a yacht, chilling on a private jet and chilling with Gloria James in a vineyard. It’s also important to note that Lambo refers to Gloria James as “wifey.”

In the above video you can see some of Lambo’s efforts. It opens with The Godfather-theme music which is followed up with Lambo telling us what a gangster he is.

In another video on his YouTube channel, he heads to a local sneaker store called Purple Carpet to with members of his entourage to buy some Lebron sneakers. At one point Lambo turns to the camera and says:

You n*ggas dont be f*ckin with Purple Carpet, dont fuck with me. 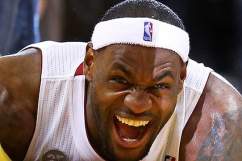 3. The Couple Could Be Seen Seated Together at Game 6

At Game 6 of the NBA finals where the Miami Heat managed to stay in the series thanks to Ray Allen’s brilliance , Gloria and Lambo can be seen sitting side-by-side watching the action. The website Baller Alert says that the couple have been dating since around February 2013.

4. He Has No Problem Showing Off Lebron’s Championship Rings

Among some of Lambo’s Instagram selfies, include numerous shots of him wearing one of Lebron’s NBA championship rings:

And just in case you weren’t sure that he is in fact friends with Lebron, there are some pictures like this:

Lambo takes the time to refer to Lebron as his “role-model,” despite the fact he’s two years older than King James.

Basically, all this guy does is go on vacation and pretend to be famous. He’s probably on a boat right now, trying to set up a selfie with LeBron in the background.

5. This is Slightly Less Controversial Than the Rumor Gloria Banged Delonte West

In 2010, rumors surfaced that Gloria James had sex with Lebron’s then-teammate at the Cleveland Cavaliers, Delonte West. West never reached the heights after leaving the Cavs and the rumors continued to persist. In an interview with The Boston Globe he says:

The best player in the world (LeBron James) [thinks], [I] allegedly had sex with his mother. Growing up in the hood, that’s the worst thing you could say is something about somebody’s mother. That would get you punched in the face. That hits home.

West said he suffers from a bipolar disorder, which also greatly affected his career.