It hasn’t taken long for Jon Stewart to get back into the swing of things at The Daily Show after his summer vacation. He was in brilliant form on September 17 when he absolutely ripped into CNN and Wolf Blitzer for their haphazard reporting on the Washington Navy Yard Shooting.

Stewart marveled that CNN could be so inept in the wake of their infamously disastrous Boston Marathon Bombing coverage, when CNN announced an arrest that never occurred. 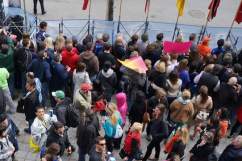