In one of the most bizarre press conferences Heavy has ever had the privilege of seeing, former NBA superstar Dennis Rodman made some startling announcements. One being that he will coach the North Korean Olympic basketball team, the other being that on January 8, he, along Irish gambling website, Paddy Power, will host the Paddy Power Dennis Rodman Basketball Invitational in Pyongyang.

According to Rodman: “I’m going to try to get the best players who used to play in the NBA [to play in the invitational].” The plan for the tournament is to have it take place on January 8, North Korean despot Kim-Jong Un’s birthday. Rodman spoke about the tournament:

I know in time Americans will see I’m just trying to help us all get along and see eye to eye through basketball, and with my friendship with Kim I know this will happen. I am certain that the Paddy Power Dennis Rodman Invitational will move things along in the right direction.

RT @nickyp1989 can I get a market on Kim Yong-Un being the games top scorer?

The Guardian reports that Paddy Power got involved with Rodman in Rome in April 2013 when the former Chicago Bull was in Italy doing promotional work for the website. He met Paddy Power (the company’s founder, he’s a real person) and Rodman told the Irish bookmaker about his plans for “basketball diplomacy.” The gambling site have stressed the do not “endorse or support” the North Korean regime and have consulted human rights groups along the way. The International Crisis Group’s North Korean expert, Daniel Pinkston, has somewhat supported, Power and Rodman’s move:

Someone might say that Dennis Rodman provides political legitimacy to the regime, or it can be treated as a propaganda coup,I think that’s greatly exaggerated. If you have a former president of the United States, that factor might be much greater. But someone like Dennis Rodman can’t do that. He can’t lift sanctions – he doesn’t have that power or authority.

The risks and costs are very, very low, and what you’re creating is a channel for the exchange of ideas. It’s a very small channel, but it’s there.

Upon his return from North Korea on September 9, Rodman also let slip the name of Kim-Jong Un’s baby daughter, Ju Ae. Rodman also spoke about being wined and dined by the despotic dictator and “spending time by the sea.” There was no mention from Rodman however about the fate of imprisoned US citizen Kenneth Bae. 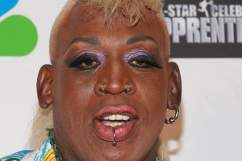