Diana Nyad is the first person to successfully swim from Cuba to Florida without a shark cage at the age of 64. Here’s what you need to know about the impressive swimmer and her feat. 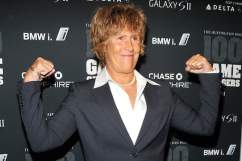 Nyad began her journey on Saturday morning from Havana and ended on the shores of Key West around 2:04 p.m. Monday, reports the Daily Mail. The record breaking swim totaled a distance of 103 miles and took 52 hours, 54 minutes and 18.6 seconds to complete.

During the swim, Nyad wore a full bodysuit, gloves, booties and a mask at night for when jellyfish rise to the surface. Before the swim, she said the equipment would slow her down, but believed it would be effective. The support team accompanying her on the journey had equipment that generated a faint electrical field around her, which was designed to keep sharks at bay. She stopped from time to time for nourishment, but was not allowed to touch any of the boats surrounding her.

2. It Was Her Fifth Time Attempting the Feat

This was Nyad’s fifth attempt to complete the record breaking swim. Her first attempt was at 28-years-old in 1978 and then three more times in 2011 and 2012. Her last attempt was cut short as a result of boat trouble, storms, unfavorable currents and jellyfish stings that left her face puffy and swollen.

Nyad also paused near the end of the swim on Monday to says thanks to her team before finishing the last two miles of the grueling feat.

“This is a lifelong dream of mine and I’m very very glad to be with you,” Nyad said. “Some on the team are the most intimate friends of my life and some of you I’ve just met. But I’ll tell you something, you’re a special group. You pulled through; you are pros and have a great heart. So let’s get going so we can have a whopping party. Thank you, all of you, thank you for your generosity.”

Congratulations to @DianaNyad. Never give up on your dreams.

It takes a lot of grit and determination to attempt a swim five times, congratulations Diana Nyad on crossing the… http://t.co/ZeghPZFTqd

Nyad broke swimmer Penny Palfrey‘s record in the Cuba to Florida swim. In June 2012, Palfrey swam 79 miles toward Florida without a cage before strong currents forced her to stop.

In 1974, Nyad set a women’s record of completing the 22-mile Bay of Naples race in 8 hours and 11 minutes. The swimmer then rose to prominence in 1975 after circling Manhattan Island in 7 hrs, 57 minutes. In 1979, she she set a world record for distance swimming for both men and women over open water by swimming 102 miles from North Bimini Island, Bahamas to Juno Beach, Florida without the use of a shark cage. She was inducted into the National Women’s Hall of Fame in 1986 and then into the International Swimming Hall of Fame in 2003.
Read More
5 Fast Facts, Breaking News, World Records

Loading more stories
wpDiscuz
0
0
Would love your thoughts, please comment.x
()
x
| Reply
Diana Nyad became the first person to successfully swim from Cuba to Florida without a shark cage on Monday at the age of 64.