British native Mitul Shah is being named a hero of last week’s Kenya shopping mall attack, where he sacrificed himself for the lives of over 30 children. He was at the mall representing his company in a cooking competition and was shot down toward the beginning of the assault carried out by the al-Shabab terrorist group.

Here are five fast facts you need to know about Mitul Shah.

1. Shah Sacrificed Himself for a Group of Children

As al-Shabab members entered the mall and began shooting innocent civilians, Shah offered himself as a hostage in exchange for the lives of a group of children, according to the Mirror. Shah has been hailed as a hero after his negotiations allowed 33 kids to escape the mall. The children were there participating in a cooking competition. He was one of the first people killed at the beginning of the attack, according to the Daily Mail.

“He was trying to negotiate the freedom of the children in order for him to be taken as hostage,” said Dipak Shah, Mitul’s boss. 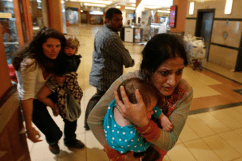 Up to 3 American Teens Are Terrorists in Kenya Mall Massacre

2. The Company Shah Worked for Mourns His Death

Shah was a sales executive for the oil cooking company Bidco Oil. His colleagues have been sharing their grief about the loss of their valued employee.

“It was a heroic and brave act – a true reflection of his soul,” said Dipak Shah, Mitul’s boss. “He was a wonderful person who always went out of his way beyond the call of duty to help others.”

“He was a born leader and an inspiring soul loved by one and all,” the company said through a statement.

3. Shah Was President of the Bidco United Football Team

Shah held the position of president of his company’s Bidco United Football Team at the time of his death. The team, based out of Thika, Kenya, is a division one squad in Kenya’s national soccer league.

Shah was also an avid fan of the Manchester United football club, according to the Daily Mail.

4. Shah Had British And Kenyan Citizenship

Mitul Shah was born in April 1975 in North London. He went to school in Kenya, afterward returning to England to study management science with computing at Kent University in Centerbury. He obtained a bachelor of science degree.

He later joined Bidco Oil Refineries in Kenya as a management trainee, according to the Daily Mail. He worked his way up the corporate chain and landed himself a position as a team leader in the company’s marketing department.

5. Shah Leaves Behind a Wife and Daughter

Shah leaves behind his wife, Rupal Shah, and a young daughter, Sarai.

Loading more stories
wpDiscuz
0
0
Would love your thoughts, please comment.x
()
x
| Reply
British native Mitul Shah is being named a hero of last week's Kenya shopping mall massacre, where he sacrificed himself for the lives of over 30 children before being shot.