During his September 10 address to the American people in which he justified potential military action in Syria, President Obama implored all citizens to view sickening footage of the aftermath of President Assad’s poison-gas attack on his people:

Indeed, I’d ask every member of Congress and those of you watching at home tonight to view those videos of the attack, and then ask, what kind of world will we live in if the United States of America sees a dictator brazenly violate international law with poison gas and we choose to look the other way?

“Those videos” refers to crowdsourced footage released over the weekend by the Senate Intelligence Committee.

If you’ve been searching for the videos, they can be viewed below. Beware, this footage is extremely graphic and disturbing. 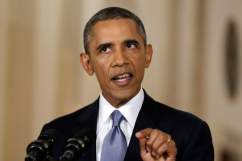 Obama Speaks to the American People About Syria [VIDEO & TRANSCRIPT]