Yesterday, the media began reporting a possible agreement between the U.S., Russia and Syria to hand over control of chemical weapons in the civil-war-torn country and avoid a military strike by the U.S.

On Monday night, President Obama appeared on CNN and affirmed his position on the potential agreement, calling it a “breakthrough,” but he did add that it would not be enough.

The suggestion was made almost off-hand by John Kerry yesterday while speaking to the media. Kerry did not expect that to be a acceptable solution for the Syrian regime. But Russia seized on the comment — called a “gaffe by some — and thrust it forward as a viable alternative to a U.S. strike.

Today, the Syrian opposition came out against the proposed plan to avoid a U.S. strike. The agreement would place Syria’s chemical weapons stockpiles into UN control and removing them from Syria.

“I doubt very much that the regime would give up its stockpile of chemical weapons just to avert a strike,” said Khalid Saleh, official spokesman for the Syrian National Coalition, in an interview. “The regime has committed so many crimes against humanity and was allowed to get away with it. A delay would embolden the regime more.”

In yesterday’s interview, Obama also addresses the threats that came from Syrian President Assad during his interview with Charlie Rose, where he told the U.S. to “expect every action” in retaliation. 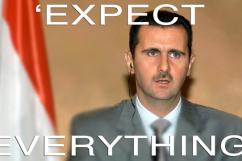 Assad: ‘Expect Everything’ if U.S. Attacks Syria, Including Chemical Attacks on U.S.

After some initial floundering, President Obama told the American public that he will fully consider the new proposal.

“Now if the regime immediately surrendered its stockpiles to international control, as was suggested by Secretary Kerry and the Russians, that would be an important step,” she said. “But this cannot be another excuse for delay or obstruction, and Russia has to support the international community’s efforts sincerely or be held to account.”

Even still, many believe that a U.S.-led military strike on Syria would turn the tide of the war and properly reprimand Assad for his alleged use of chemical weapons on August 21. Defense Secretary Hagel told Congress today that he agrees with the attack and does not believe the proposed strike will allow for boots on the ground.

“We will not send America’s sons and daughters to fight another country’s civil war,” Hagel said. “We are not contemplating any kind of open ended intervention or an operation involving American ground troops. A political solution created by the Syrian people is the only way to ultimately end the violence in Syria.”

The Assad regime has come out in favor of Kerry’s proposal, but continues to wage war on the rebel forces. Reuters reported today of continual shelling and air strikes on rebel-held areas of Damascus. With the possibility of a U.S. strike on hold, Assad has been given the freedom to continue using the full extent of his military power to continue his civil war.

According to an AP source, Kerry will be meeting Russian Foreign Minister Sergey Lavrov in Geneva on Thursday to discuss Syria’s disarmament.