Two Texas teenagers heroically saved a woman from being kidnapped two weeks ago after noticing her mouthing the words “help me” from the back seat of a car they were driving behind, reports NBC.

In the dramatic 911 call released on Wednesday Aaron Arias, a 19-year-old college student, tells the dispatcher that he and his friend Jamal Harris, 17, a Seagoville high school student, noticed strange behavior from the car in front of him on the highway.

“Yes, I’m on the highway,” Arias first told a Kaufman County Sheriff’s Office dispatcher. “I’m witnessing a robbery–not a robbery–a kidnapping. It’s me and another guy, so we’re checking out the girl in the backseat because, we’re like, ‘OK, she’s kind of attractive. And then, all of the sudden, you know, the guy is turned back, looking at us.The woman looked panicked and was “saying, ‘Help me,’ or something, whispering it.”

The teens followed the car down U.S. 175 until police finally caught up with them in Kaufman. The driver, Charles Atkins Lewis Jr., was arrested and charged with aggrivated assault. He remains in jail on a $50,000 bond.

The woman, 25, was checked by paramedics and was unhurt. She was kidnapped on August 22 after leaving a downtown office building. She drew the attention of Arias and Harris about an hour later.

Arias said he met the woman at the scene of the rescue, who was very grateful.

“She hugs us,” Arias said. “I would describe it as the best hug I have ever gotten.” 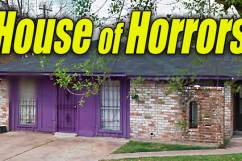 Loading more stories
wpDiscuz
0
0
Would love your thoughts, please comment.x
()
x
| Reply
Two Texas teenagers heroically saved a woman from being kidnapped two weeks ago after noticing her mouthing the words "help me" from the back seat of her car.