Tommy Morrison KOAM-TV/KFJX-TV Interview – Summer 2008Former heavyweight boxing champion Tommy Morrison sat down with former KOAM-TV/KFJX-TV Sports Director Cody Coil in the Summer of 2008 to talk about Morrison's boxing success and his efforts to make a comeback in the ring.2013-08-26T02:57:16.000Z

The former boxing champion and actor, Tommy Morrison, died at 44 years old. Morrison died on Sunday evening in a Nebraska hospital and was reported to TMZ by boxing promoter Tony Holden. Although the cause of death is still unspecified, Morrison had been having health problems related to his struggled with AIDS. You can see an interview with Morrison in the video above.

1. He was a Heavyweight Boxing Champion

In 1993, in an epic fight between Morrison and boxing legend George Foreman, Morrison was able to win the title of Heavyweight Champion for the World Boxing Organization. You can watch the last few minutes of the twelve-round match above.

In 1990, Morrison made his acting debut in ‘Rocky V,’ as Tommy ‘Machine’ Gunn, a young and talented street fighter that becomes a protege of Rocky Balboa. You can see the clip of the movie above.

‘Rocky’ star Sylvester Stallone reportedly saw one of Marrison’s real life boxing matches and arranged for him to audition for the role. 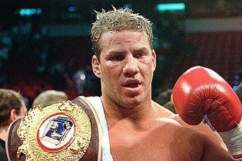 According to TMZ, Morrison tested positive for the AIDS virus in 1996. The illness ended his boxing career leading him to deny having the illness later in life, however Morrison was denied official entry back into professional boxing.

According to Morrison’s boxing record, the former heavyweight champion had an incredibly record consisting of 48 wins, 3 losses, and one draw.

Many of Morrison’s matches, including his championship fight against George Foreman, ended with a Unanimous Decision, meaning the three judges have all decided on the same winner.

5. His Boxing Nicknames was ‘The Duke.’

Like many boxers, Tommy Morrison had a catchy fighting nickname. He earned the title “The Duke” early due to his relation to film legend John Wayne. Morrison is the grandnephew of the real “Duke,” John Wayne’s famous nickname.

Read More
Boxing, Breaking News, Deaths, R.I.P.
After a 17-year battle with AIDS, heavyweight boxing champion and co-star of the film 'Rocky V' has died in Nebraska. He was diagnosed with HIV in 1996.