John Kerry spoke in front of the U.S. Senate Foreign Relations Committee during a debate this afternoon, along with Defense Secretary Chuck Hagel, making further attempts to convince the American people and their representatives in Congress to understand the implication of not acting against Syria for using chemical weapons. Twitter was flowing with play-by-play quotes and analyzing.

The secretary of state’s statements addressed how America’s enemies and the world would interpret a lack of action by the United States.

Kerry says the world is watching "not just what we decide, but how we make this decision."

Kerry: Syria debate is not about Obama's red line: "That is just plain and simply wrong."

Sec. State Kerry challenges Senate on Syria: "The world wonders if the United States will consent through silence." 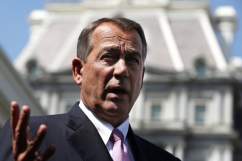 Obama Gaining Ground in Congress for Military Strike on Syria

Kerry aimed to sway the American public as well as the lawmakers before him.

Kerry: It is important to explain to American people to join us in focusing on what is at stake here..we're stronger as nation when do that

He also spent quite some time reiterating the validity, quality, and content of the information that has been presented as proof that Assad’s government used the chemical weapons against rebel forces and civilians alike.

Kerry makes point that no one in the Syrian opposition had capacity for a chemical weapons attack like 8/21, in heart of Assad territory.

One of the high points of Kerry’s statement was his effort to express that this call to arms is not in an effort to start another war or to satisfy President Obama’s “red line” statement, but to uphold international warfare laws and norms.

Sec. Kerry says he, Hagel, and Dempsey remember the vote on Iraq and says #Syria isn't Iraq. The U.S. evidence is not faulty or fake.

Kerry’s statement elevated the international law issue, reiterating the fact that the use of chemical weapons is inexcusable and intolerable.

We must send the unmistakable message when we say "never again," we don’t mean "sometimes." Never means never, says Kerry

Media and analyst criticisms varied, but what is clear is that the U.S. government is determined to get Congress to approved Obama’s “limited” attack.

I've never before listened to Kerry and nodded my head repeatedly in agreement. Never before thought he was sincere.

Kerry needs to spell out what the strategy is. He's done the moral argument, but let's talk pragmatics. Obama's rhetoric shifted. Why?

If Obama gave Kerry's speech, the public would support action. But he can't.

Kerry: World wonders whether US "will stand in silence" on #Syria. –> As we've largely done for two years.

Not sure where Kerry gets the idea that bombing Assad will prevent the creation of extremist safe havens. If anything, it likely helps.