Airport officials in Idaho are slowly releasing details of a horrifying incident that occurred on Thursday night when a United Airlines plane had to make an emergency landing in Boise, reports CNN.

The captain of the United Airlines 737 suffered a heart attack in-flight and later died of the arrest at an area hospital.

An unidentified crew-member told the tower in Boise:

We got a man down, chest compressions going on right now. I’m not sure too much right now on status.

I am sad to confirm that our co-worker passed away last night. Our thoughts are with his family at this time.

2. The Crew Made an Announcement During the Flight if There Was a Doctor on Board

After the crew became aware of the perilous situation, a call came across asking if any passengers on board were doctors.

CBS Boise reports that a first-year resident doctor volunteered and performed CPR on the man. It’s further reported that the pilot weighed around 300 pounds and had to be dragged from the cockpit before CPR could be performed.

When the plane made its landing the, the resident returned to her seat, she told her fellow passengers that she couldn’t revive the captain.

Upon landing the pilot was rushed to Saint Alphonsus hospital in Boise where he was sadly pronounced dead. 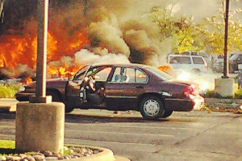 3. The Crew Made an Heroic Effort to Land the Plane

According to the transcript, the crew while also dealing with the fact they had to land the plane, gave instructions to the tower on where emergency responders should enter the plane:

A passenger, Bryant Magill, told CBS Boise about how impressed he was with the flight crew:

I’m really impressed with all the flight attendants. They kept themselves calm. They kept it professional. There was no panic on the plane. I saw them working on the captain, I did not see much of it other than that, but I knew something was wrong.

4. It’s Unknown if the Pilot Was Still Piloting the Plane When it Landed

The flight was en-route from Houston to Seattle when the captain suffered the attack. The emergency call was made to the tower in Boise at around 8 p.m. (MST). Officials have not revealed the captain was still in control of the aircraft when it landed.

5. Passengers Were Stranded in Boise

The passengers of United Airlines 1603 were stranded in Idaho for some time until United arranged for a pilot to be flown in from San Francisco. The shocked travelers were eventually able to continue their journey to Seattle where they landed at around midnight local time.