The monsters at the Westboro Baptist Church are back at it again, just a day after they mocked the anniversary of 9/11, they are now taking aim at the suffering people in Boulder, Colorado. Massive floods have engulfed much of Boulder County and northern Colorado as at least three people are reported to have died already. 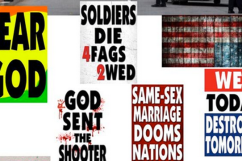 The English language fails when it comes to describing the evil filth making up the population of Boulder, Colorado! #godsentthefloods

The “church” have promised to picket the city “if there’s anything left.” They go on to describe the people who live in the stricken area as “evil people.”

As the scene got more desperate in Boulder County over the weekend, Westboro continued their sick tirade.