The Westboro Baptist Church have to get in a dig at every disaster the befalls humanity, and today is no different. The terrors from Topeka a rejoicing today that fire that engulfed the legendary Jersey Shore. Yesterday, the “church” similarly rejoiced at the horrors being seen in Colorado with the massive flooding that continues to drown the state. 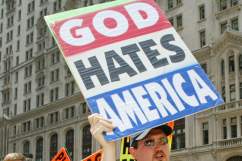 When Gov. Chris Christie showed up at the Jersey Shore to give a message of support to the business owners and residents of the area, Westboro had a message for him:

Westboro Baptist Church: Top 10 Things You Didn't KnowWatch the top 10 things you didn't know about Westboro Baptist Church. They're the most hated family in America, maybe the world, and while we all know they're a bunch of despicable morons, the reality is that there is some subtlety to their brand of awful. Also, they tweet some really dumb stuff.2013-04-26T17:57:14Z