Cleveland monster Ariel Castro may have died due to auto-erotic asphyxiation, a new report states. The Ohio Department of Rehabilitation and Correction’s report says there is, “consideration of the possibility of auto-erotic asphyxiation.” The report goes on to state that Castro was found with “his pants and underwear were pulled down to his ankles.” 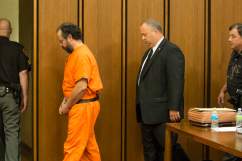 Report: Ariel Castro’s Prison Guards Never Checked on Him on Night of Death

The monster who was sentenced to life plus 1,000 years in prison for the kidnapping and rape of Amanda Berry, Gina DeJesus and Michelle Knight in August, was found dead in his cell on September 3.

Corrections officers found pictures of Castro’s family scattered around his cell as well as a bible that opened “to John Chapters 2 and 3.” The Cleveland Monster choked himself using a bed sheet.

Loading more stories
wpDiscuz
0
0
Would love your thoughts, please comment.x
()
x
| Reply
Just one of the many revelations from the new Ohio Department of Rehabilitation and Corrections report.