Clint Caldwell, 32, of Brooklyn, New York has been named as sixth biker to be charged with offenses relating to the road rage attack on Alexian Lien on September 29, reports ABC New York.

While driving on Manhattan’s West Side Highway, Alexian Lien, his wife and their 2-year-old daughter were accosted by a group of bikers. The “Hollywood Stuntz” riders intimidated the family to such an extent that Lien panicked and drove through a group of the bikers, gravely injuring one. The bikers then pursued Lien’s SUV, eventually dragging him from the car and assaulting him.

Here’s what you need to know about Caldwell:

1. Caldwell is Not Featured in the Original Viral Video

The video was went viral that showed the pursuit and some of the attack doesn’t show Caldwell, according to reports. His role came afterward, when he’s alleged to have pulled Alexian Lien from his Range Rover, a move that allowed the gang to take advantage of Lien, reports CBS New York. 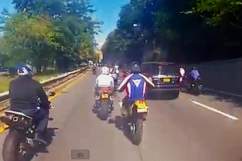 2. Caldwell Will Make a Court Appearance on October 9

Like other bikers arrested for their roles in the melee, Caldwell is charged with gang assault, assault and criminal mischief. It’s not known if Caldwell has a lawyer yet, reports The Daily News. 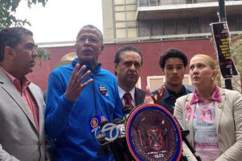 3. Caldwell is the Seventh Person Questioned in Relation the Assault

With Caldwell’s arrest, the NYPD are demonstrating how serious they’re taking the assault. The inquiry is now in its second week, with Caldwell taken into custody alongside, Reginald Chance, Craig Wright, Christopher Cruz, Allen Edwards and NYPD officers Wojciech Braszczok and Samir Gonsalves. Only Edwards and Gonsalves were released without charge. 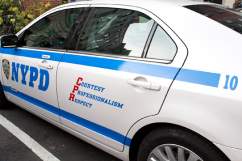 4. Another Biker Will Be Arrested on Wednesday

CBS New York is reporting that NYPD sources have told them that another biker is expected to hand himself over to police in relation to the assault.

5. Caldwell is Implicated in Unreleased Footage

While not shown in the original viral video that shocked the world, where bikers are shown pursuing Alexian Lien and his young family through a New York highway. NYPD sources are alleging there is further video, that is not being released, that will implicate further bikers.

Loading more stories
wpDiscuz
0
0
Would love your thoughts, please comment.x
()
x
| Reply
Clint Caldwell of Brooklyn has been arrested and charged for involvement in the assault of Alexian Lien in the road rage attack that became a viral video.