Bus driver Darnell Barton, 37, from Buffalo, New York, had just picked up 20 rowdy high school students from nearby McKinley High on a regular day. It was October 18. As he continued along his route heading southbound through Buffalo, he noticed a woman climbing over the railing on the Scajaquada Expressway, reports The Buffalo News.

In the video you can see motorists and and cyclists carrying on about their journeys as the woman heads toward certain death. But not Barton. He pulls his city bus to the side of the expressway and engages the woman. Eventually he gets her back from the railings as he comforts her. Then, after getting the woman help from two other women, one of whom was a counselor, he returns to his bus to a rapturous round of applause from the rowdy teenagers. 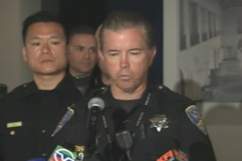 Loading more stories
wpDiscuz
0
0
Would love your thoughts, please comment.x
()
x
| Reply
The city of Buffalo has a new hero.