A New York delicatessen was confronted with an armed robber wielding a .22 caliber pistol. The gunman shot at the wall of the Crooked Hill, Long Island convenience store and demanded cash.

The Stop and Shop worker wasn’t having it.

The worker whipped out what looks to be at least a two foot long machete and shooed the gunman away, like an annoying fly — rather than a potentially murderous villain.

Deli owner, Elena Alvarado told NBC 4 that she wished the employee hadn’t gone after the robber because it was a risky move saying “You can make money again, but not your life.”

Still, it’s hard to argue with such sweet justice evocative of the classic SNL sketch, Samural Delicatessen. Check it out below. 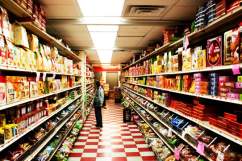