The disgraced former mayor of San Diego Bob Filner is due to appear in court in southern California facing charges of wrongful imprisonment, battery and menace and deceit, reports UT San Diego.

These fresh allegations are believed to have been made by three unnamed women. The charge of false imprisonment is viewed as a felony, while the other charges are misdemeanors, reports NBC San Diego.

Filner resigned from his role as mayor on August 30, 2013, after several accusations of sexual harassment were made against him by a variety of women. 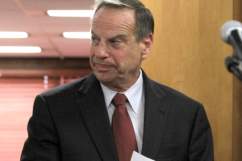