A 23-year-old Somali man with Norwegian citizenship is suspected of planning and carrying out the Westgate Mall attack which occurred in Nairobi, Kenya, last month. Hassan Abdi Dhuhulow is suspected of being one of the four gunman who stormed the Westgate shopping center, a mall known for being a hot spot for upper-class Kenyans and Western expatriates. Estimates are now saying that more than 67 men, women and children died as a result of the attack.

The New York Times is reporting that Duhuhulow’s identity as one of the gunman has not yet been confirmed but investigators are actively questioning friends, family, and associates in order to gain more information.

Dhuhulow’s family reportedly left their home in Somalia as refugees in 1999. From there the family settled in the small Norwegian coastal city of Larvik, about 75 miles south of Oslo. There he attended Heyerdahl High School where, according to local newspaper Ostlandsposten , his classmates became aware that he was “fanatic about Islam.”

Dhuhulow’s sister, speaking to the New York Times, said that he returned to Somali in 2009 and communication between he and the family became sporadic. 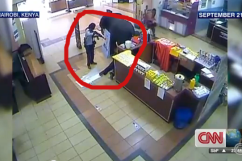 2. Authorities Believe He Wore a Black Shirt or Jacket

As more footage emerges of the horrific scenes that unfolded inside the Westgate mall, authorities have made new discoveries. The gang of gunman, originally suspected to be between 10 and 15 people, is now believed to be four. One of the gunman seen in these videos, a man wearing a black shirt or jacket, is believed to be the 23-year-old Dhuhulow.

You can see the video of the gunman suspected to be Dhuhulow above.

3. Duhulow Was Acquitted in the Murder of a Journalist

The National Union of Somali Journalists wrote in March 2013 that a man with the same name as Dhuhulow was acquitted in the murder of Hassan Yusuf Absuge, a radio journalist in Mogadishu. The murder was determined by Somali authorities to be an act of retribution by terror group Al-Shabaab for Absuge’s coverage of local Islamic extremism.

Duhulow was acquitted of the crime because, “there was no proof to corroborate the alleged role of Dhuhulow in this case.”

4. Bodies of Attackers Cannot Be Identified

A photograph, taken from the roof, of the damage the Westgate Mall sustained during the multi-day siege. (Getty)

The chief pathologist of the Kenyan government told the New York Times this week that bodies were still being pulled from the rubble of partially-collapsed mall. Kenyan authorities believe that remains found near AK-47s and other weapons may be the bodies of the gunman by, “the bodies are charred. There’s no face. There’s no clothes.”

5. Norway Is a Hotbed of Al-Shabab Activity

The BBC is reporting that an estimated 20-30 Somali natives have left Norway for Somalia to fight along side Al-Shabab, the group that claimed responsibility for the Westgate Mall attack. There have even been reports that highly ranked Al-Shabab leaders may have spent time in Norway.