At least five people have been injured during an early morning traffic incident in downtown Indianapolis, reports WTHR.

1. The Van is Reported to Have Been Carrying Caskets

The incident occurred at around 11 a.m. in the area around Ohio Street and College Avenue in downtown Indianapolis.

3. The Victims Were All in Cars

It was originally reported that the van had struck pedestrians but now it appears all of the victims were in their cars. One woman was ejected from her car during the incident, reports Fox 59. 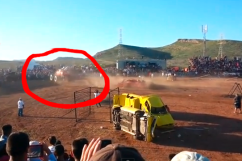 4. All of the Victims Were Taken to Wishard Hospital

No pedestrians were hurt in the incident. None of the injuries are reported to be serious, reports The Indy Channel.

5. The Driver Was One of Those Taken to Hospital

The driver of the van was ejected from his vehicle during the crash.

Read More
5 Fast Facts, Breaking News
At least five people have been taken to area-hospitals after being hit by a van.