Geike was killed while walking along this road at 12500 Pacific Highway Southwest.

Three men have been arrested in relation to the murder of 20-year-old Specialist Tevin Geike on October 5 in Lakewood, Washington, reports CBS News.

Police are searching for five suspects in total, with reports suggesting that two of the arrested men are co-operating with police. All of those arrested, and those being sought, are U.S. soldiers at Joint Base Lewis-McChord. The same base that Geike was based at. Police have named 23-year-old Jeremiah Hill as the “main suspect.” 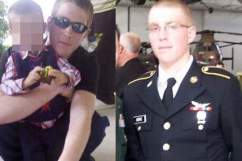 1. Hill’s Alleged to Have Confessed to a Medic About the Murder

Police investigating Geike’s death were tipped off by a military sergeant who said he had information relating to the murder. According to the source, Jeremiah Hill had asked to see a medic when he returned to the base early on Sunday morning. Hill told the medic that he had stabbed someone to death, reports KIRO TV.

When Hill was later confronted about this by his commanding officer, Hill first told the officer that he cut his hand chopping vegetables and later that he had cut it when he was cutting a parachute chord.

2. Hill Appeared to Give Geike a Bearhug

Police are now playing down the race-issue as it relates to this murder.

3. Hill Has Not Yet Begun Co-Operating With the Investigation

Hill has not yet given a formal statement to detectives and has lawyered up. Police have searched the vehicle as well as Hill’s bunk at the base, they are said to have recovered multiple items of evidence from the search. Police have said that until Hill makes a statement, they are no clearer to discovering a motive for the attack.

4. Two Other Men Who Were Arrested Are Co-Operating

Two other men, Cedarium Johnson and Ajoni Runnion-Bareford, both 21, have been arrested and are co-operating with police.

Hill is still an active serviceman and is assigned to combat infantry. Geike had been out with friends on the fateful night celebrating his imminent discharge from the army.

Loading more stories
wpDiscuz
0
0
Would love your thoughts, please comment.x
()
x
| Reply
Jeremiah Hill has been named as the main suspect in the stabbing murder of US Army Specialist Tevin Geike.